Carcassonne, the walled city of Occitania

Carcassonne is possibly one of the cities most visited by tourists in southern France. We visit the Medieval City and later the Bastide Saint-Louis and other monuments. I will tell you What to see in Carcassonne in a day?

What to see in Carcassonne in a day? The walled city of Occitania

What to see in Carcassonne in a day?

I got up very early from my hotel in Toulouse, to go to the station and take advantage of the day in Carcassonne. When leaving the station you are in the area of the Bastide Saint-Louis, but I walked quickly until crossing the river as it had been with the official guide of Carcassonne at the Narbonnaise gate of the Medieval City at 9 o’clock in the morning.

The Medieval City of Carcassonne.

To the right of the river rises the historical helmet of the city, still inhabited by people of the town that has its houses in the interior (something that caught my attention). 52 towers, 3 kilometers of wall, and 2 concentric rings made it an almost impossible place to conquer.

Sarah’s punctuality was tremendous, although mine was also warm despite the trip, but I was sure that it would be worthwhile to stop at Narbonnaise Gate, (this name comes from her orientation to Narbonne), built on 1280, by order of Philip III, the Bold One.

Indicate that this door was remodeled in the nineteenth century: the battlements and the slate roof by Viollet-le-Duc and added a pseudo drawbridge. 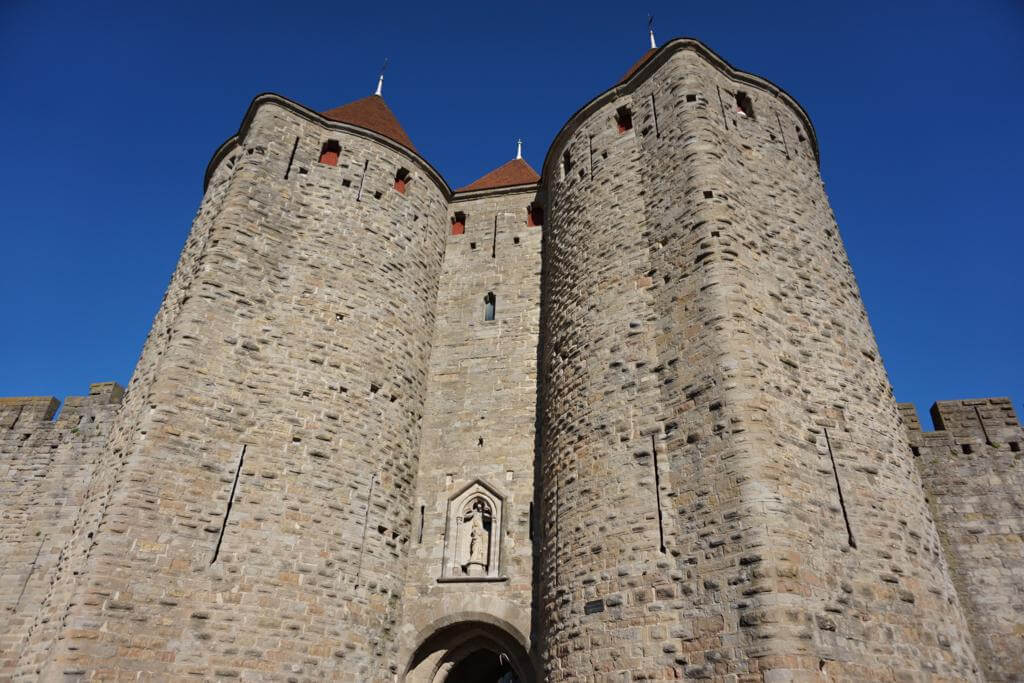 We continue the visit walking through the Palestra, a space of 1 kilometer in length that separates the two walled enclosures, Sarah was explaining the history of the city, anecdotes, historical passages in the medieval enclosure, with which I learned much more about Carcassonne.

Indicate that the road is completely leveled, which is appreciated when walking. This happens since the 13th century, when the second wall was built. Indicate that in the nineteenth century Viollet-le-Duc restores the Citadel, and has to destroy the homes of the destitute. We can appreciate different elements in the interior walls like boarded windows. You can also see «the Black Mountain». 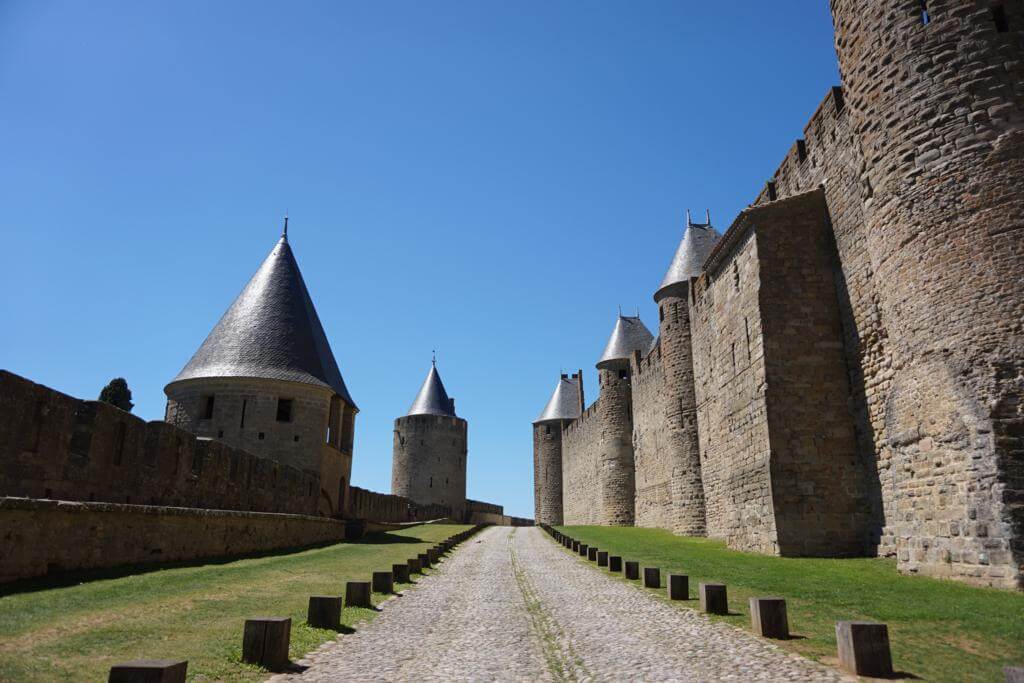 In our tour I could see how you can climb over the walls and get a view of the city and its surroundings. 52 towers of great beauty along 3km of construction that leaves no one indifferent.

I was surprised that there was an inner wall and also an outer wall. The kings of France in the thirteenth century ordered to build the exterior and in turn, rebuild the interior, obtaining an impregnable enclosure. 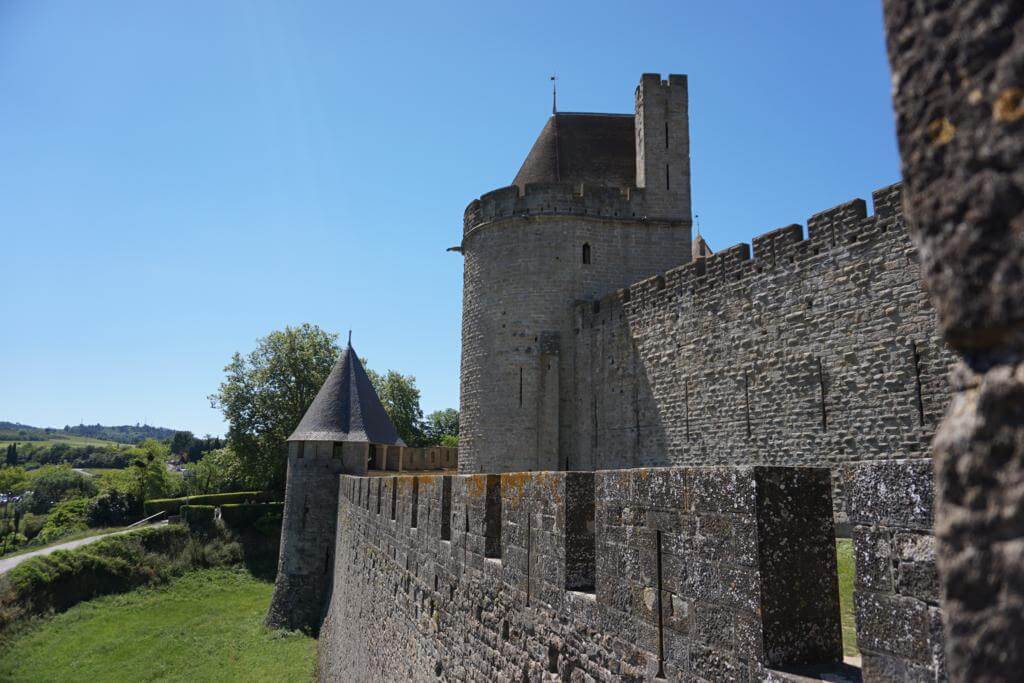 4.- The Basilica of St Nazaire.

Describing the beauty of this temple is complicated, as well as defining its origin, which according to documentation is 925. Pope Urban II visits the city in 1096 and blesses the stones of the cathedral.

In 1801, the temple ceases to be a Cathedral, a title that is transferred to the church of Saint-Michel located in Bastida. In 1898 the church receives the title of Basilica from the hands of Pope Leo XIII. 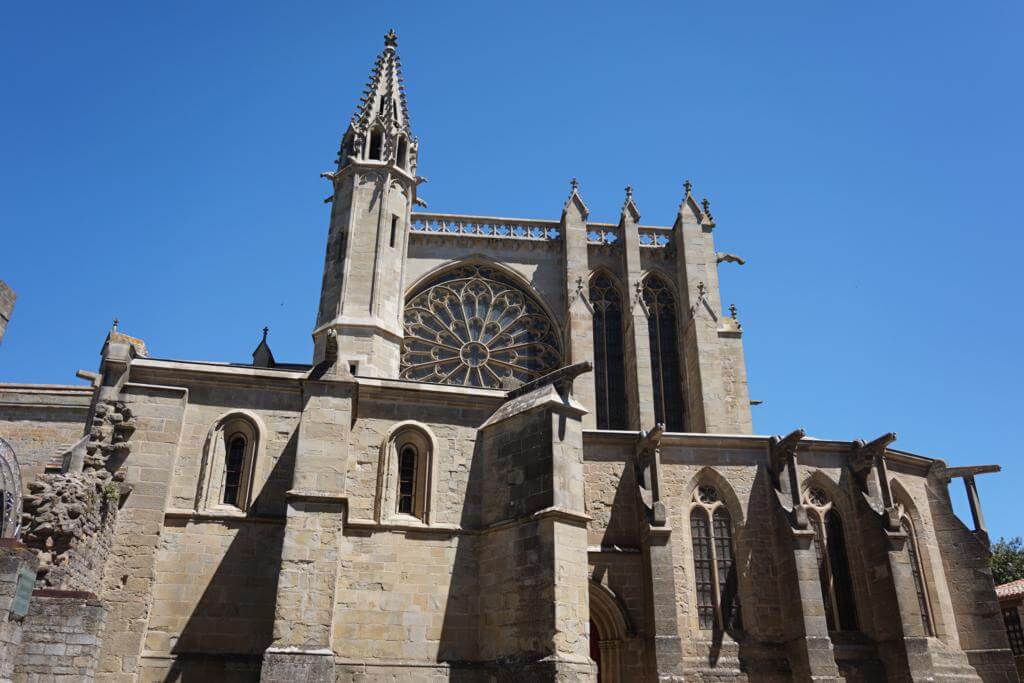 Once I said goodbye to the charming and didactic guide of Carcassonne, and to receive the Carcassone City Pass I visited this defensive construction. After crossing the bridge and entering the castle grounds I could see the beauty of its architecture.

Walk through its walls, enjoy its interior courtyard, explore the different rooms of the castle, cross its tower, photograph its Roman towers, contemplate the city from above, read the history of the Dame Carcas … all complete a visit extraordinary 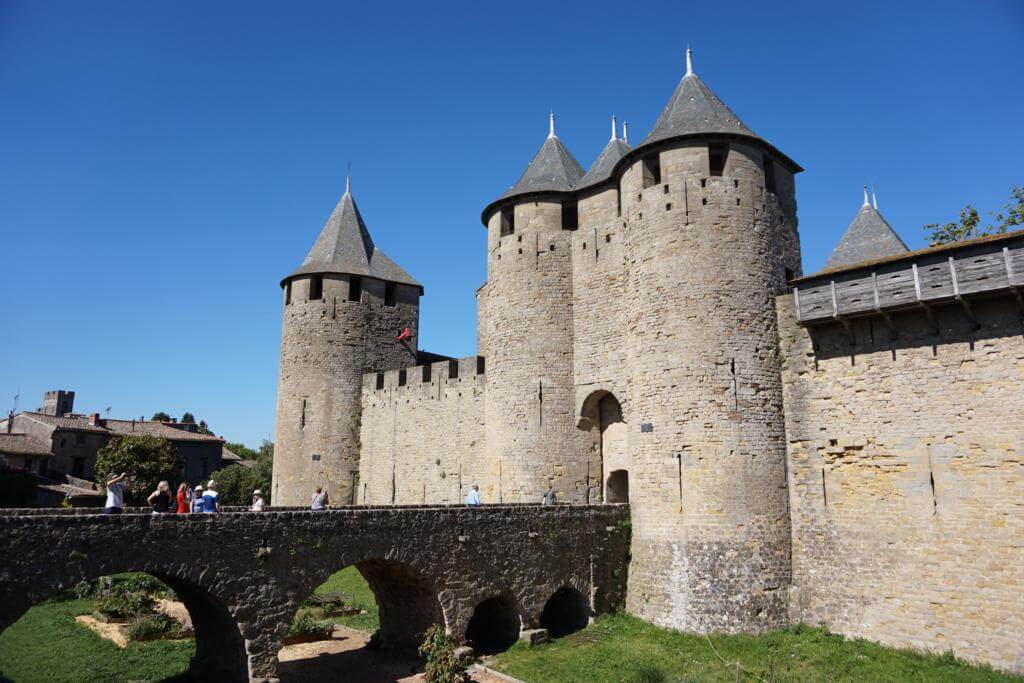 6.- The streets of the Medieval City.

When leaving the Castle, I spent time and again walking through the cobblestone streets of the city, full of businesses facing tourists: shops, restaurants, souvenirs, ice cream shops, crepes, hotels … we really found ourselves in a mini city. 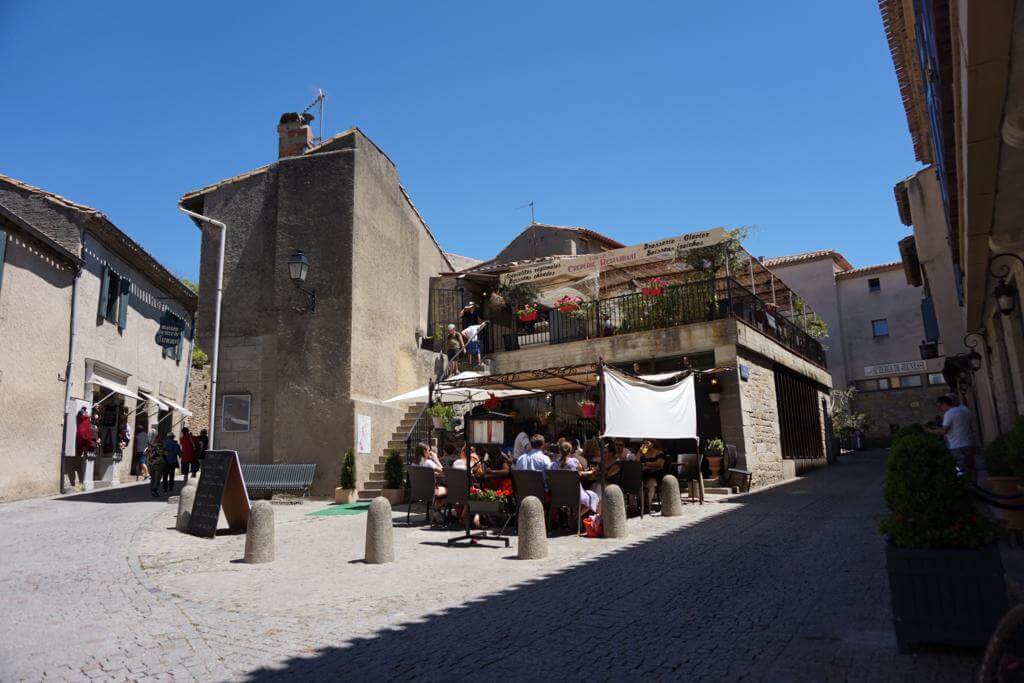 I leave the medieval city leaving by the other door of the enclosure, located in the western part, in front of the Aude river. Like curiosity to indicate that this door has appeared in multiple films: The Visitors return for the Tunnel of the Time, Robin Hood, or The Imbécil (the Man of the Cadillac). 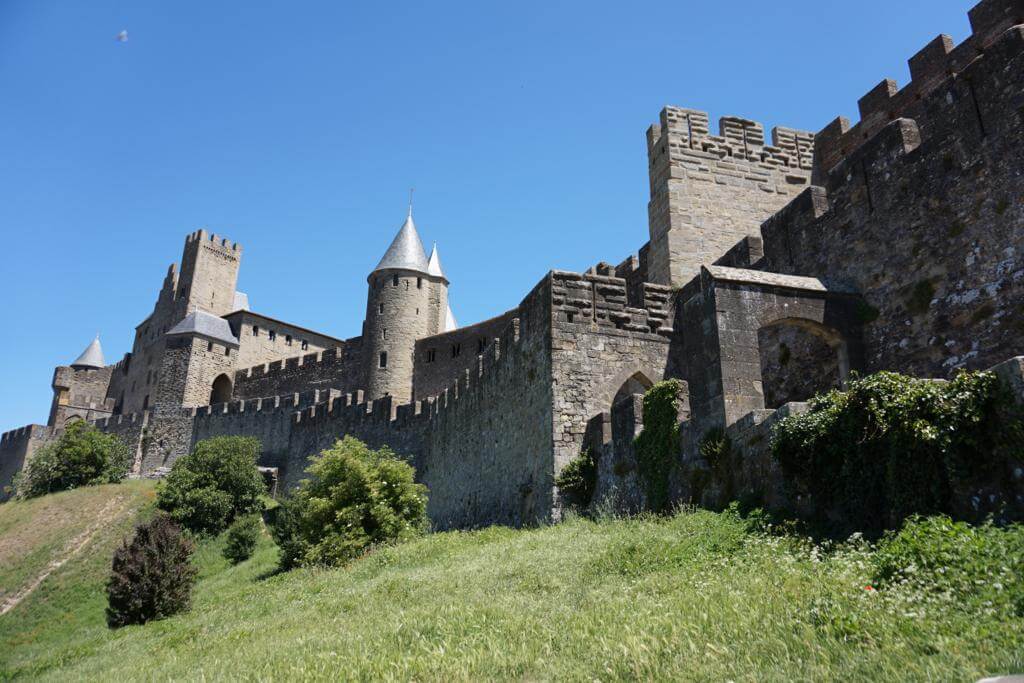 Located at the foot of the medieval city, the Gothic temple built between 1849-1859 was designed by Viollet le Duc. It was declared a protected site as a World Heritage Site by UNESCO. 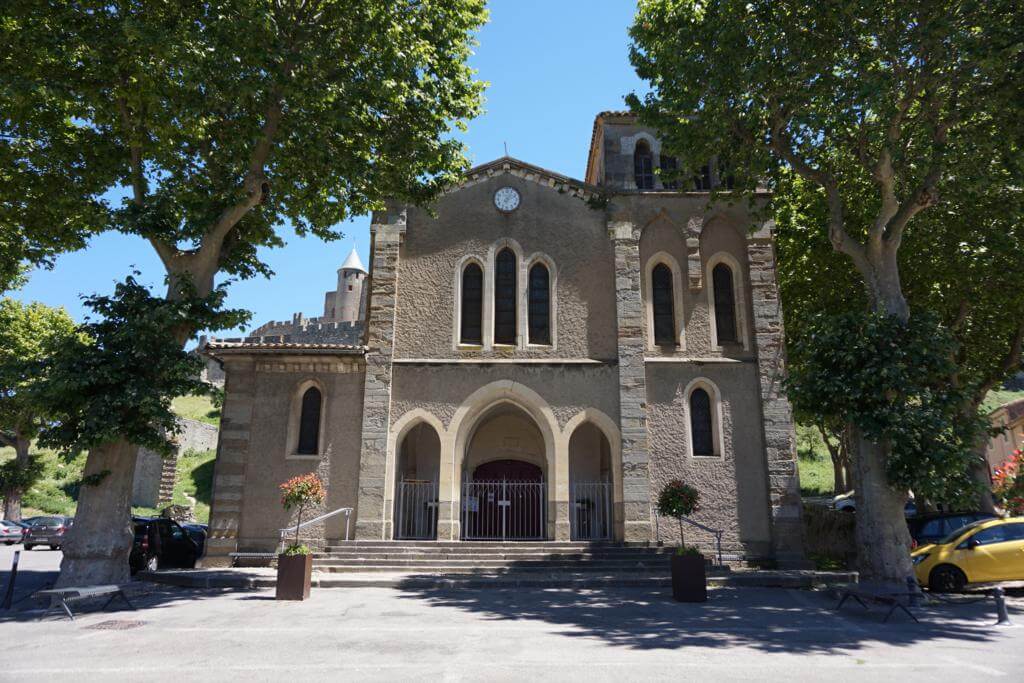 It is situated on the left side of the river, it was built in 1260 under the rule of King Saint-Louis (hence its name). Everything revolves around its central square, Carnot, complemented by stately homes and religious buildings.

After visiting the Medieval City, I set out to cross the Old Bridge with its 12 arches to reach the bastide. Its origin dates from the 14th century, where it was the only way to cross from one side of the city to the other (there is currently the Puente Nuevo). Indicate that said bridge is part of the Camino de Santiago. 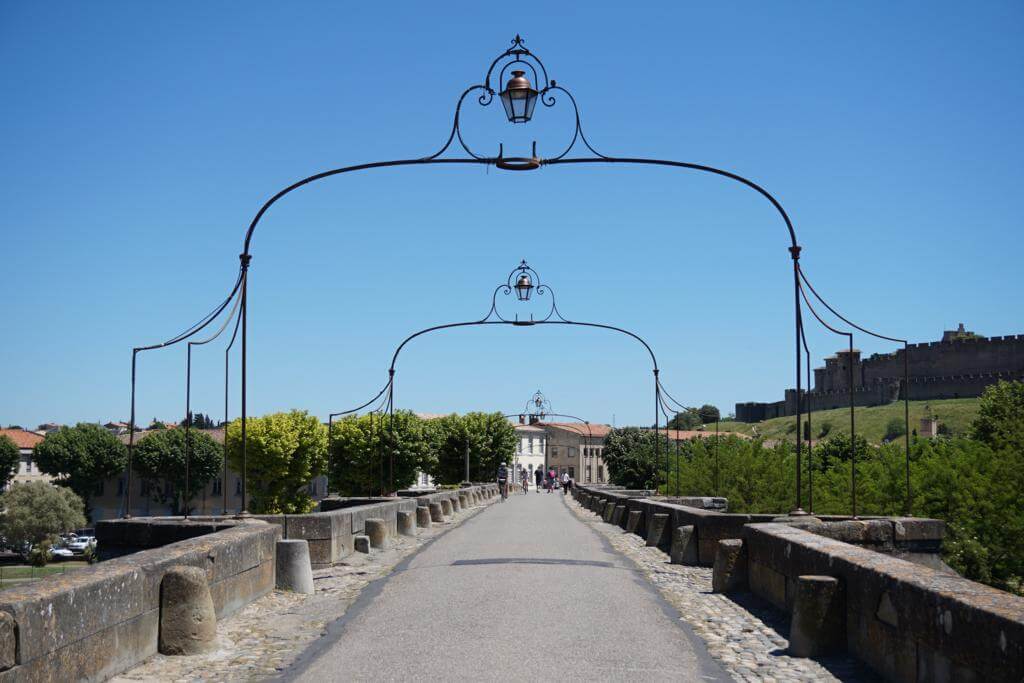 Passing the old bridge, I find on the left a small chapel, which was built using the money from the inheritance of Juan de Saix in 1527 and which served as a hospital for the plague. 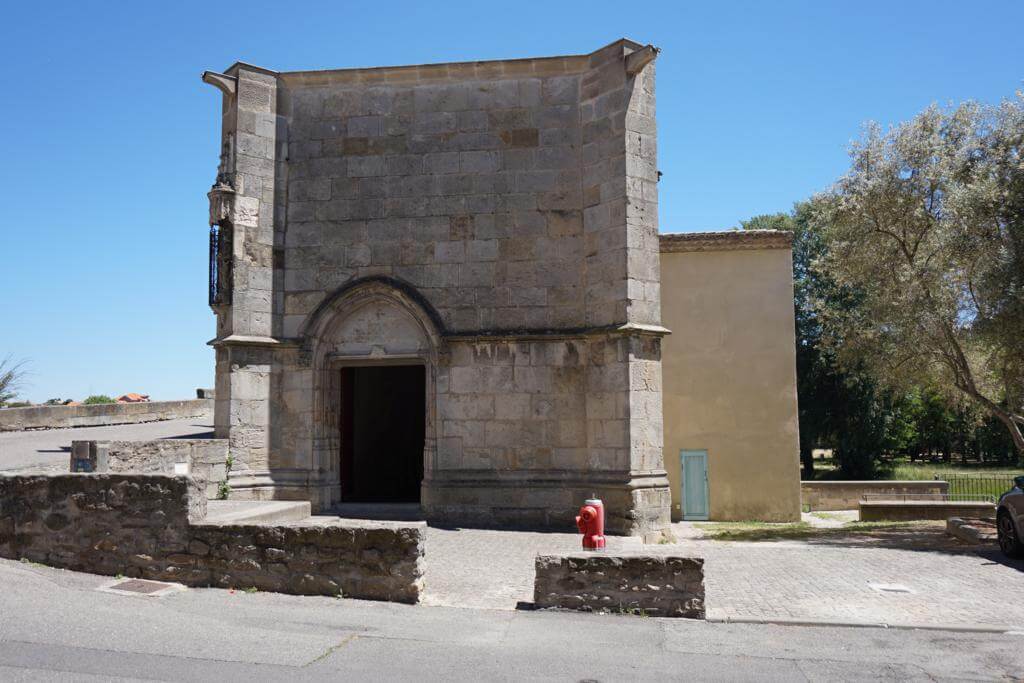 11.- Entrance porch of the Jacobins.

I continue walking through the streets of the city until I pass under this 18th century portico, the only remaining part of the 4 doors of the lower city between 1355-1359. It was rebuilt in 1779, and next to it there is a piece of wall. 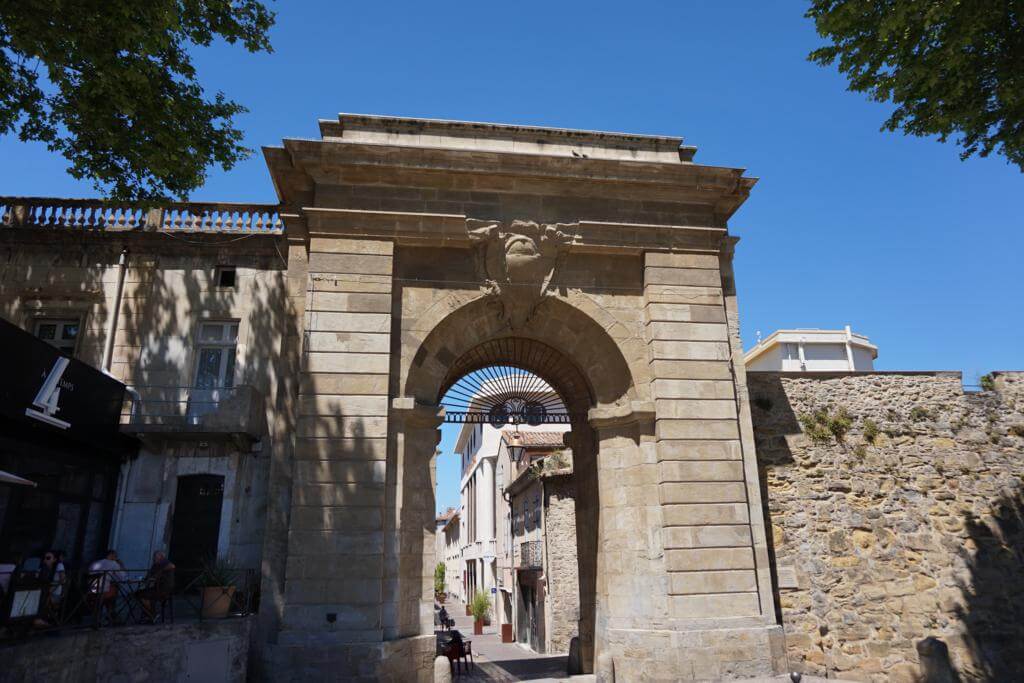 A few meters away, I find the 13th century cathedral, which I can not visit because it is closed. Gothic temple, simple with its huge rosette of 8 meters in diameter, was declared a cathedral in 1803. It suffered a fire in 1849, but was restored by Viollet le Duc. 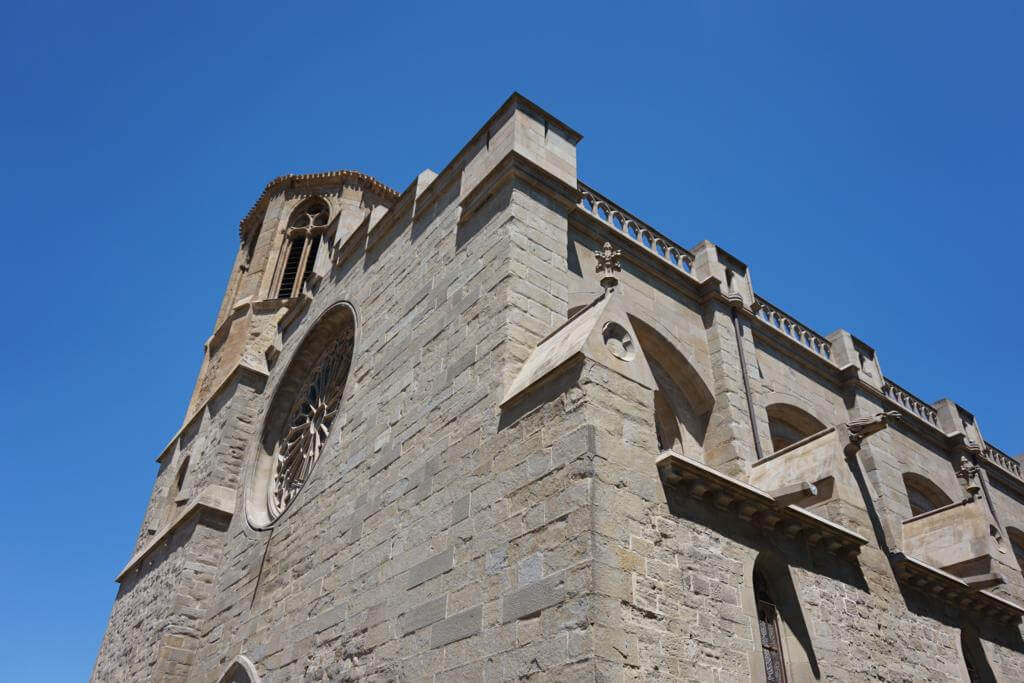 Under the scorching heat and a few minutes from the cathedral I find this small but very beautiful church, where possibly, what attracted me the most was its beautiful organ.

I climb to the top of its bell tower after surviving a large number of irregular stairs, but the effort is worth it, as I can enjoy the city and see the medieval city. 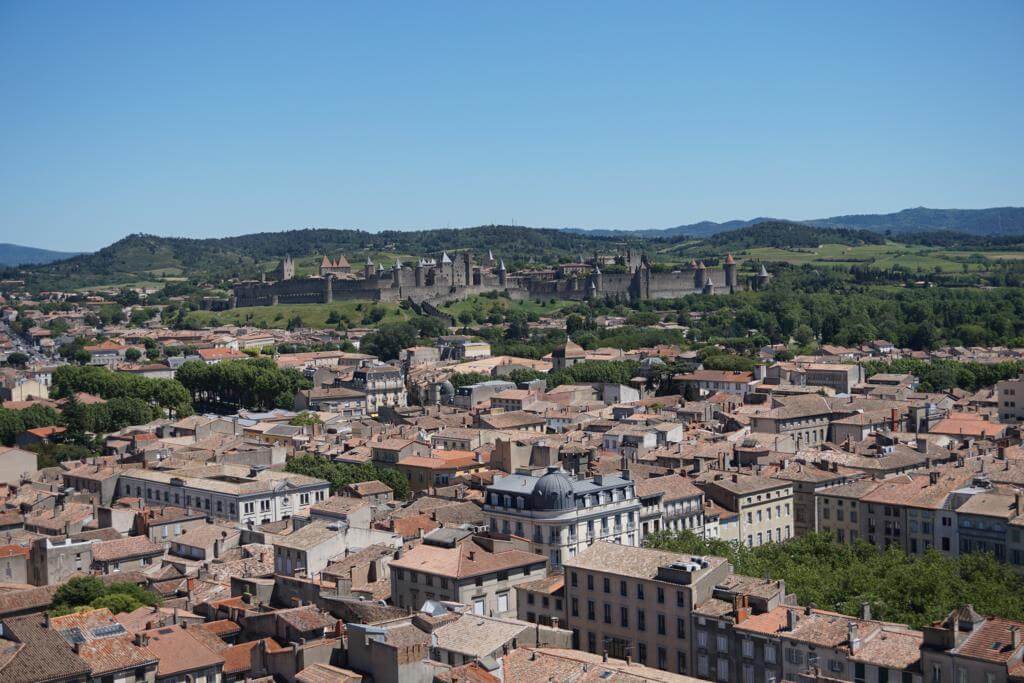 To the tourist office of Carcassonne that gave me the «Carcassonne City Pass» with which I could enjoy a guided tour by the tour guide, Sarahi. I also took advantage of the card to obtain several discounts. Indicate that due to lack of time I could not make the most of this card.